After a major renovation in 2005, the oldest hotel in Geneva, the most prestigious of 5-star “palaces”, launched itself once again in an ambitious program of construction works: a transformation of the attic spaces. The brief included a spa, a fitness centre, a pool and new guestrooms. This was imagined for this unusual space. The creation of additional guestrooms in an extension added onto the interior courtyard and the renovation of existing courtyard rooms and some suites brought the total surface of the renovation to more than 4’400 m2 / 47’000 square ft. The complexity of the project was increased due to the fact that the hotel remained active whilst heightening the two top floors, completely exposing the existing wooden structure. Once liberated of its venerable covering, the installation of the new structure was possible. The logistical and structural challenges of this project pales by comparison to the quality of the finishes and assemblies of the different materials which were used. A resolutely contemporary design which respects the original spirit of the hotel has given it a new dynamic. The icing on the cake is a rooftop terrace, offering a unique panoramic view. 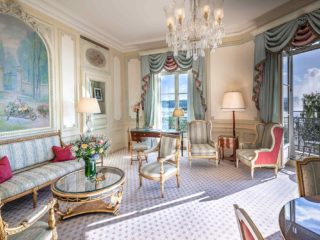